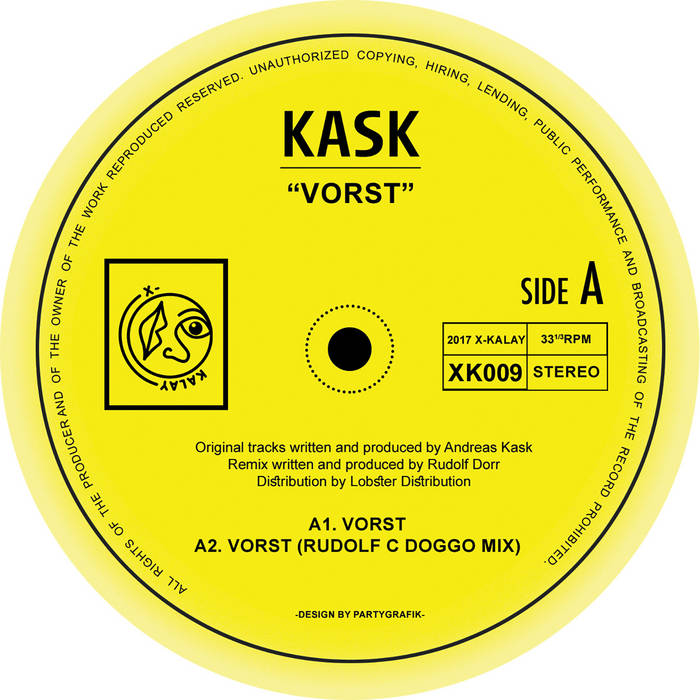 venn This is music for journeying

darwyn Kaamos is the music they might of played on the Pan-American flight to the space-station in 2001 A Space Odyssey...another goodie from Kask. Favorite track: Kaamos.

August sees us return to where it all began with a very special record from founding X-Kalay artist, Kask.

Although relatively quiet on the release front since his X-Kalay EP dropped in January 2016, Andreas has been keeping himself busy helping establish Tallinn as one of the most forward thinking and underrated electronic music communities in Europe.

His club Lekker, which he part owns with a number of other Tallinn based friends and artists, has blossomed over the past 18 months with a consistent flow of on point and progressive bookings ranging from Anthony Naples to Helena Hauf to Willie Burns. The venue deservedly hosted the inaugural Boiler Room Tallinn show in February 2017 and showcased a selection of Tallinn’s local talent; Lekker owners Kask and Dima Disk on the bill.

Andreas and the Lekker collective also played an important role in Estonia’s incredible Into the Valley festival – hosted on a derelict prison site just outside of Tallinn. Here he shared the stage with heavyweights such as the Black Madonna, Jeff Mills and Craig Richards. Not much time for releasing new records then.

Thankfully that changes next month with the arrival of ‘Voorst’ on XK009. Shot through with Kask’s trademark introspection and melancholy his second effort for X-Kalay explores the more ambient strains of house and electro.

‘Voorst’ opens the A-side with a deep kick and sparse drums, dreamlike pads giving way to an ecstatic melody that is all breath and decay. The soundtrack to driving the deserted city blocks at 2am with rain coursing down the windshield. Back on X-Kalay for remix duties Rudolf C switches up this ambient masterpiece into a 90s rave banger – straight up club material.

On the B ‘Silver Surfer’ momentarily ups the ante and takes us on an undulating journey through pulsating basslines, swirling arpeggios and biting hats. Closing things off perfectly ‘Kaamos’ is a stripped back jam full of emotion; a label favourite with a beguiling combination of ambient electro styles and 80s nostalgia. Big!